Phase one of our Grand Business Plan is underway! Now, in my other weekday incarnation as a management consultant the mere whisper of the words ‘business plan’ fill me with horror and bring to mind late nights poring over multiple, scary spreadsheets followed by the unenviable task of ‘socialising’ a strategy and key milestones (a misnomer if ever there was one to describe standing in front of a lot of sceptical, angry-looking clients, trying to persuade them of something you have no idea will work or not – rather than out with your mates in the pub). Not this business plan. This plan is a very different beast indeed. It basically involved investing in seven bell tents and the ubiquitous colourful bunting, developing some alfresco ablution facilities (read: a crapper in the woods consisting of a very deep hole covered by an old milking stool and an antique toilet seat, surrounded on three sides by old doors), building a stone fire circle and magically transforming the old Western Red Cedar we cut down in the spring into some tasteful, wooden benches upon which to relax and take in the views.  In the space of a week, we somehow managed to turn our top field from a run of the mill enclosure for sheep into a rather captivating little camp site.


And when I say ‘we’, on this occasion it genuinely was a family affair. There is nothing like the prospect of 17 paying guests arriving on a Friday night to get the wind up your sails and your arse into gear. Parents-in-law were roped into erecting tents, the kids were on bunting duty and in charge of finding all of the potential death traps posed by camouflaged guy ropes, solid bits of steel holding up shelters and open fires (our rationale being that a one and three year old running amok in a field are probably about the same level on a risk matrix – see, there’s that other pesky business plan creeping in again – as a group of 17 pissed up lads on a stag do weekend.) Profits in Amazon and UPS once again skyrocketed as delivery after delivery of ‘essential’ camping items arrived in the yard: solar lights, trestle tables, tarps, folding chairs, enamel tableware – you name it, we now probably own it. But among all of the chaos of setting up, we did find a moment to pause and reflect on the significance of probably being the first people to build and light a fire on our Iron Age hill fort (using traditional fire-lighting methods anyway – I daresay the previous residents of our house may have had the odd instant barbecue up here – but bear with me as I get to the poignant bit…) for over 3,000 years. I think I can safely say that the significance of this moment was pretty much lost on my kids but for my husband and I we wanted to make sure we paid our respects to our ancestors and asked for their blessing in making our business plan a success. Now you sure as hell don’t get to do that bit in your shiny, grey office in the City.

So all set up and ready to go, we now had the nervous bit of waiting anxiously for the group to arrive, pink balloons fluttering in the wind to show them where to park (that’s what happens when you involve a three year old in vital logistics planning). Hoping to God that they don’t turn out to be nutters, or worse still, really boring and hard work. As it happened all our fears were completely unfounded. You know you’ve slightly misjudged your audience when you fill a cool box with cheap lager as a welcoming gesture, and they arrive with magnums of port and whole Stiltons. The whole weekend they were charming, respectful but very much ON IT. I kind of gathered that they must have been alright when on the first night my husband’s suggestion that he would be back at the house by ‘about 8pm’ ended up with him rolling in closer to midnight, having joined his ‘new mates’ for a few beers. Not that I was bothered. Happy (paying) campers and a night with full custody of the TV will put a smile on my face any day of the week.

So what exactly, I hear you ask, do you do with a group blokes in field for a whole weekend, all intent on giving their best mate the best possible send off before he heads off into a life of matrimonial bliss with his ball and chain? (I am not being disrespectful to women or the sanctity of marriage here, the stag had an ACTUAL 20lb ball and chain strapped to his ankle for the whole weekend – a tradition among this group of civil engineers apparently – that and the pink unicorn costume. Nice touch). Well, my husband’s USP for running stag dos is, of course, being a deer stalker, making an actual stag up front and central in the proceedings. There was an impressive set of fallow antlers overseeing the whole shebang from the top of one of the shelters and a whole deer brought in half way through for the stag and his party to skin, butcher and eat. And when I say eat, I mean all of it: eyeballs, testicles, heart, the lot. And as if that wasn’t enough to test the most adventurous of palates this was followed by a smorgasbord of  enormous, insects arranged, ‘temptingly’ on a wooden platter like a terrible mash-up of Masterchef and David Attenborough does the Amazon. We had brined tarantulas (mmmm – apparently like “eating a cyst”), dune bugs and scorpions to really get the juices flowing.  That was all coupled with the largest array of big boy’s toys you could possible imagine: double-headed throwing axes, flick knives, air rifles and bows and arrows. Pretty much the full gamut of things that can kill you.  And very much not the field to be wandering through if you have recently read We Need To Talk About Kevin. 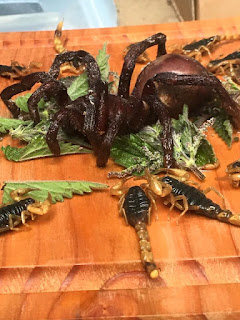 So, understandably, the children and I were banished from the top field for the weekend, just getting tantalising reports of how it was all going every time my husband popped back to the house for something he had forgotten. That is the great thing about running courses at our own place. Instead of having to try and fit everything into the back of the Landrover like some super-advanced level game of Tetrus, you can simply wander up and down from the field to the workshop and the house at your leisure to pick up bits and pieces. And of course fill your wife in on all the juicy snippets of stag do bravado and derring do. Which included attempting to better a random selection of feats from the Guinness Book of Records such as drinking a litre of lemon juice (very ill-advised if it is taken with an amuse bouche of brined tarantula or crispy scorpion apparently). During the clean-up operation the following week I was slightly baffled by the number of lemon skins strewn about in the grass until this bit was explained to me. But in fairness that was about all that they left behind. By the day after they had left it was almost as if they had never been.  Now we’re gearing up for our next course this weekend where we will be actually making primitive bows and arrows in the hill fort. My husband went all misty-eyed again when he started telling me that people would have actually made the exact same type of bows that he will be making in the exact same spot. I’m just hoping he doesn’t go the whole hog and dress himself in a loin cloth and furs for the full effect. Nothing less attractive than a grown Scotsman shivering into his shave horse…


And so back to that business plan. I’m not sure we’ll be over-wintering in Barbados quite yet but it feels good to be generating something from our land finally. In some ways it feels like we’ve already had our money’s worth out of the tents. Nothing to do with the stag do. No. More for the sheer entertainment and novelty value for the kids who can spend literally HOURS in a bell tent with nothing but a few old toys, a manky old sleeping bag and some balloons to keep them busy. Talk about easy parenting, I can literally just stretch out, arms behind my head and relax, safe in the knowledge that there are no corners/objects/drops they can injure themselves on and they haven’t yet worked out how to unzip the flaps and escape. Easy as. Although I have had a slight flicker of maternal guilt that I am possibly setting my children up for a life of disrepute by letting them dance round the upright poles in the middle of the bell tents for hours on end. I console myself that getting them acclimatised to all things camping can only be a good thing and will hopefully sow the seeds for an even greater love of the outdoors. Either that or they’ll refuse to go anywhere near a tent by the time they are teenagers! Let’s wait and see…

Promote your Page too