We are rapidly learning that bartering is the way the real rural economy works. Over the past few weeks we have managed to get our hands on all kinds of stuff as well as crack on with the big jobs around the place without having to spend a single penny. Check out these recent coups…

Some fellow smallholder friends had been helping a mate ‘sort’ his pigs out and they had one and a half pig carcasses left over. Having just butchered their own pigs they were already drowning in their own pork products so they gave the lot to us in exchange for some game from the freezer. We are now 100 sausages richer and have a bit more real estate in our freezers. Cher-ching.

Preparations for our new glamping site continue apace with the next step being to install running water in our top field. Apparently to lay the pipes you need a ‘mole plough’ (nothing to do with the little furry beasts apparently – just something that goes underground).  The hard-nosed farmer flogging this particular piece of equipment refused to budge on the price, but instead offered to throw three geese into the bargain, after our kids had spent an hour chasing them around the field while said deal was being negotiated. Enter stage left our new guard dogs (although so far they have done less guarding and more lounging about by the pond – starting to see why he might have wanted rid of them…)

Nothing like inviting the family up for a ‘relaxing break’ over Easter and then, as soon as they walk in the door, handing them a pair of heavy duty gardening gloves, a pitchfork and a pair of firelighters and asking them to clear and burn great swathes of overgrown hedges and trees. All in exchange for copious amounts of chocolate and beer. Labour doesn’t come cheaper than that. 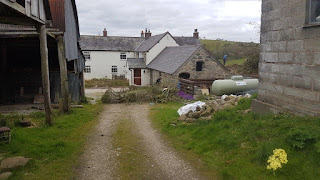 The one and only thing growing in the veg patch at the moment is the rhubarb which is trifid-like in its prolificness this year. Unlike everything else which, after a late, sharp frost, has given up the ghost meaning we have to start sowing all over again. So I’ve been offloading great armfuls of it to my folks in exchange for bean seedlings (which they cleverly protected from the sub-zero temperatures) plus a hand with the kids so I can crack on and attempt to play catch up after Jack Frost has wreaked his trail of destruction.

We have finally reached 100% production with all 8 hens now laying religiously each morning, some even producing double yolkers (so by rights you could argue for a 120% return at the moment). Alas poor Boom Boom (our aged matriarch of the coop and the last hen we inherited when we bought the place) turned up her toes up this week, but then she hadn’t laid an egg for months and had been looking ‘peaky’ (hen speak for death’s door) for some time. The upshot is that we are now drowning in eggs and anyone who shows the faintest gesture of goodwill has multiple egg boxes thrust upon them before being allowed to leave the place.

Not so much a barter so much as a negotiation to escape for 24 hours with my girlfriends for a day off the chores and the shit shovelling. After a wonderful day of pampering and relaxation, I did however try to offset the guilt of abandoning my dependents (not to mention the eye-wateringly expensive bill) by half-inching a few of the free apples from the health spa to bring back for the pigs. Given their enthusiastic oinking and chomping on the super posh fruit I think I may have been forgiven for my short absence…

So you see, regardless of what happens in the General Election and Brexit and our (apparently) shrinking economy, all you need is to master the art  of bartering and striking up a good deal and you will always come up smelling of roses. Or perhaps just a little bit of sausages.
Posted by Sheena Corry at 11:33

Promote your Page too